Hey guys! So recently with all the “extra” time on my hands (actually I don’t really have any since I still have school and work stuff). Either way, my dad and I built a fence for my flower garden a few days ago.  Last year the deer had gotten in and eaten my rose plant *gasp* and we also wanted to turn it into a hand railing for my grandparents…so instead of going and buying a bunch of expensive posts and stuff, we went into our woods and cut down locust trees.

An interesting fact about Locust trees: They were created with self-preservation in them. So you don’t need to worry about any icky chemicals from pressure treated posts you’d buy at the store. 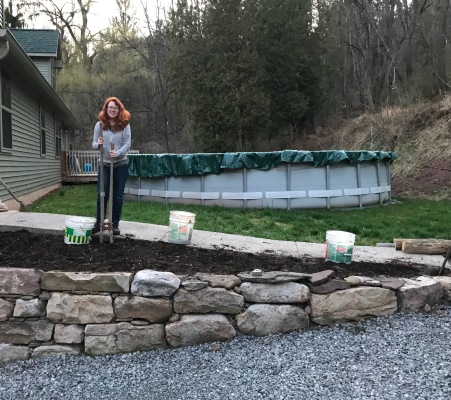 Digging about two foot holes in the ground 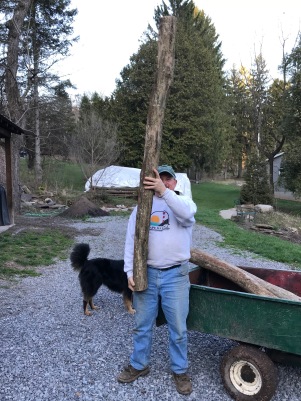 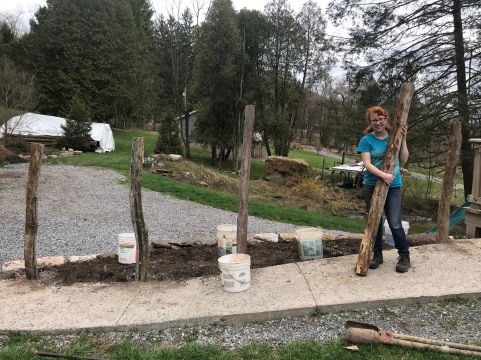 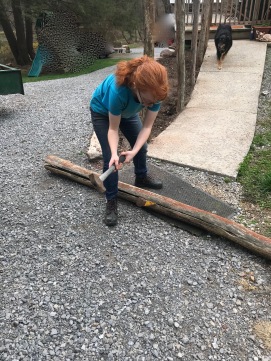 Splitting a 20 foot long to make a railing

Had to get a harder sludge hammer

My sister B helping me carry a tree 😂 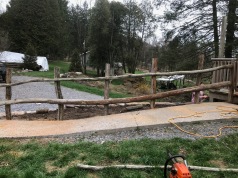 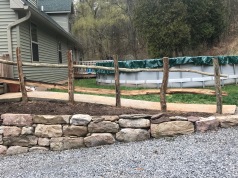 Finished front of the fence

We cut the posts to 6 feet long and buried them about two feet in the ground (maybe a little less). After securing them into the ground by pounding the dirt and stone around it till firm (we didn’t use concrete as this is just a flower bed).

We then measured for the railings and cut down a locust tree that was already dead and had a split through it. We used wedges to split the tree along the original split and it went easily thankfully! We used one side of the newly split tree as a bottom railing and attached it with 8 inch long bolts (we predrilled so as not to take forever trying to get the bolts attached).

For the top railing, we wanted to use the other half of the split tree but it was all wacky in shape so we instead went into the woods and found a small locust tree for the hand railing. We ended up having to cut a small grove in it to get it to bend in the right direction but it worked out well! We attached it with 3-inch long wood screws two for every post.

We then trimmed down the tops of the posts so they all reached 4 feet high and we trimmed off the ends of the railings so they matched (we also attached the railing on when end so it came flush with our porch).

We still want to sand it down (which I’m currently working on) and maybe polyurethane it in the summer to keep it from wearing down.

Cost: Probably 5 dollars at the most!

We made this entire project using only a drill/screwdriver (I can’t remember the name of them) and a chainsaw…in saying this I want to be VERY clear the chainsaw was used only by my dad and we all wore protective shoes incase of any slipups. PLEASE never use any type of cutting device without your parent’s permission.

Have a great day everyone!